NEW YORK, Feb. 7, 2018 /PRNewswire/ -- For his Fall 2018 collection, Joseph Abboud looked to Hollywood's past—American menswear's most elegant era—and ushered its glamour into the 21st century with the launch of American Bespoke. Channeling the effortless sartorial refinement of Hollywood's icons, this new offering, comprised of 43 looks, was shown in shades of black and grey with dramatic blazes of red—celebrating the artistry of tailoring and the aspirational essence of dressing up. 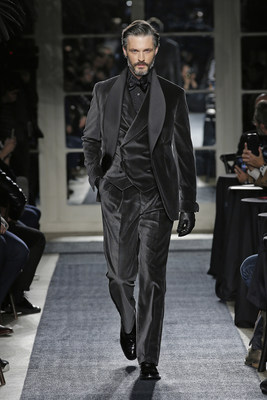 "This season I wanted to reconstruct American menswear with the launch of Bespoke. For the last 30 years, our strength has always been the art of tailoring and now we've taken it to the next level by redefining bespoke, American style," said Joseph Abboud, Chief Creative Director of Tailored Brands, Inc. Those kings of Hollywood favored the finest custom suits so it's fitting that this Fall, he dedicated his attention to the handcraftsmanship of bespoke and the luxury of proportion. Crafted in the Joseph Abboud Manufacturing facility in New Bedford factory, these bespoke garments are finished by hand with over 225 steps, such as hand-sewn armholes, which allow for a softer shoulder; pleated waistband curtains on trousers; the use of real horn buttons; and prepared sleeves with hand-mitered working buttonholes.

Continuing with his commitment to providing hand-finished, made-in-America products, Joseph Abboud has once again partnered with American heritage shoemaker Allen Edmonds on the collection's leather footwear – each pair handmade in Port Washington, Wisconsin. Founded in 1922, Allen Edmonds crafts its shoes with a storied 212-step manufacturing process and the utmost attention to detail.

Fall 2018's venue —the ballroom at the historic Wolcott Hotel—echoes the range's brooding elegance, vintage Hollywood allure, and Art Deco undertones. The space's grand architecture and jazz-club feel help bring out the collection's rich textures, dark palette, and ornate construction. Like the clothes themselves, this historic venue reminds us of that bygone era of masculine confidence and sophistication, while demonstrating how it can be used as a platform for contemporary luxury.

About Joseph Abboud
Since the age of sixteen, Joseph Abboud has been passionate about fashion. He started his career in menswear at Louis of Boston and later Polo Ralph Lauren. In 1987, Joseph Abboud launched his own eponymous label. Shortly after its debut, Abboud was accorded numerous honors including the distinction of being the only designer to have received the coveted Menswear Designer of the Year twice in a row (1989 & 1990) from the Council of Fashion Designers of America. Other awards and honors include The Cutty Sark Award for Most Promising Menswear Designer in 1988, the first Woolmark Award for Distinguished Fashion in 1989 and again in March of 1993. Numerous other prestigious awards have followed including Person of the Year from the American Apparel & Footwear Association and the Lifetime Achievement Award from MR magazine in 2016.